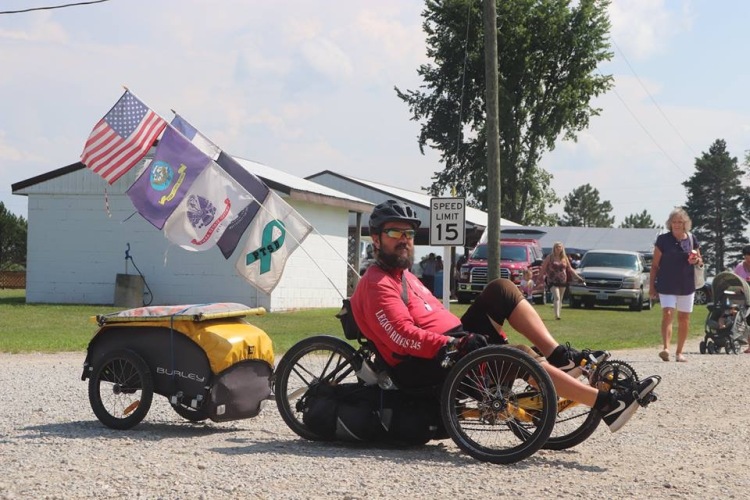 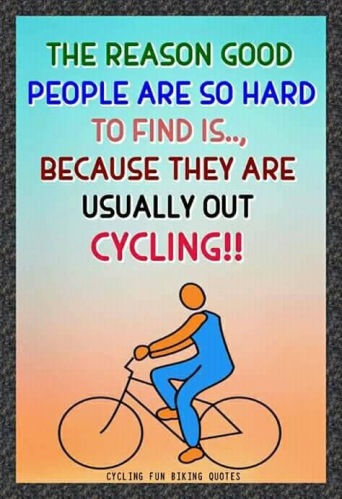 I had a great time today. I was able to load my trike and trailer in the van and drove with my mom to New Franklin Ohio. On the way, we stopped in Wapakoneta and picked up a newspaper. I was on the front page. We then drove to Upper Sandusky for lunch. While at lunch, I was interviewed by another newspaper. I am always trying to share with others and spread the news with other veterans. We then drove to New Franklin Ohio to stay with an old classmate of mine, Robert Schosker. Robert and his wife Jody were very gracious hosts and allowed us to come in, eat, and watch TV while they were out. We visited with them later that night. After a good sleep, Robert fixed  breakfast. I got to play with their dogs and visit with his son Carson. Getting back on the trike in the morning. 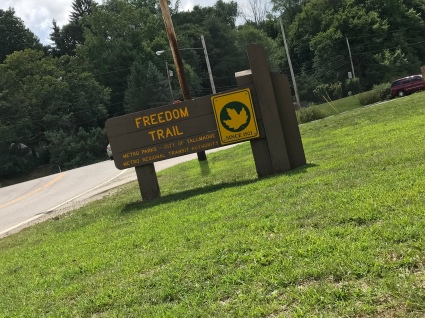 I finally got back on the road. This was after taking a short break in Ohio. It was hard to leave family and friends and I didn’t get started until 945. In a half a mile, I was on the bike trail and stayed on the bike trail for several miles. It was raining off and on but not too bad. I went through the edge of Akron and then back on the bike trail. I then went on to several country roads until I came to a detour due to a closed bridge. I then went about a mile and was stopped by a lady to see if I was OK. She ended up being a Warmshowers  host and invited me to stay with her and her family. Rachel and Nate along with their daughter Felicity were great hosts. I had a delicious pasta dinner, a soft bed, and we shared a lot of stories. I am sore but glad to be back on the road again.

I had a good long ride today. I started at nine and went on several country roads for the first 30 miles. I stopped for lunch  in Newbury at JDs. I spoke to a few men about my tour. I then made it to the Western Reserve Greenway Trail and stayed on this trail for almost 30 miles. This was a great paved bike trail. I met two cyclists on the trail who stopped and talked  to me about my tour. I finally made it to Ashtabula and met up with Tom. He put me up in a hotel and gave me some money for dinner. I also talked  to an active duty Air Force man. He is going to share my story with all his friends. I then went out for pizza. Trying to rest and get ready for tomorrow. I will be leaving Ohio and going into Pennsylvania and end up close to New York State. 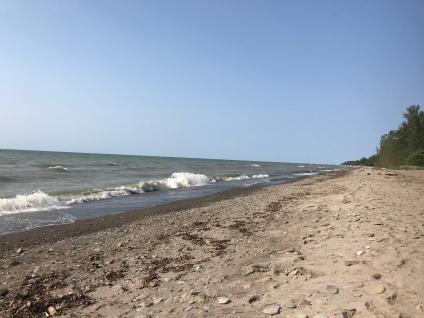 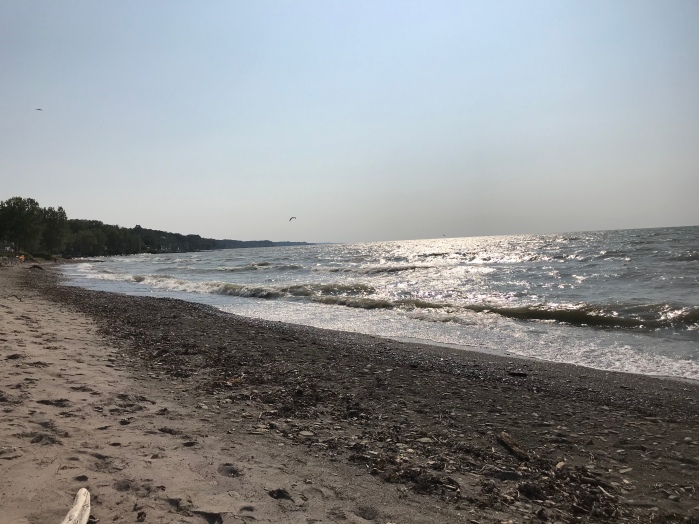 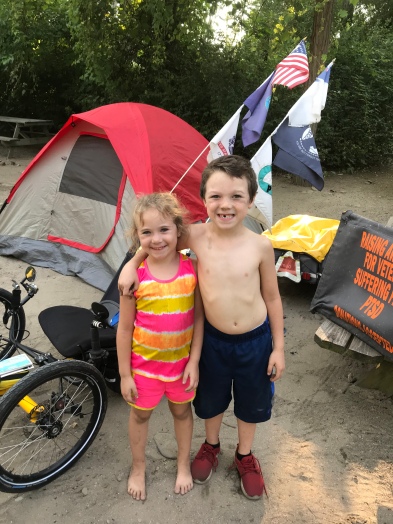 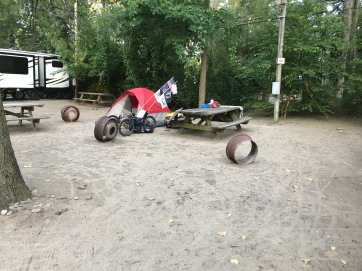 I had an easy ride today. I slept in and didn’t get started until 9 AM. I rode mostly on a four-lane highway today but most cars gave me the entire lane. I took my time but finally arrived at Sara’s Campground on the shores of Lake Erie. As I was registering, the office worker, Annie, asked if I was a veteran and if I was riding for a cause. I told her my story. She was so moved that she allowed me to stay for free. I set up camp and then walked over to Lake Erie. I soaked in the water to relax and then went to take my shower. I little boy and his sister came over and each gave me a dollar. I ate dinner at Sara’s  Diner. Ready for bed. 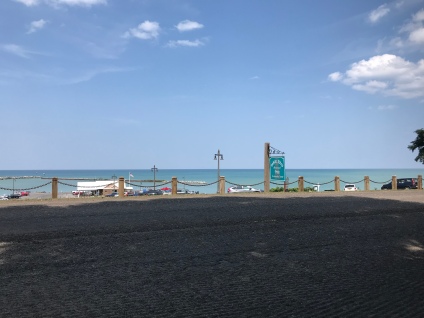 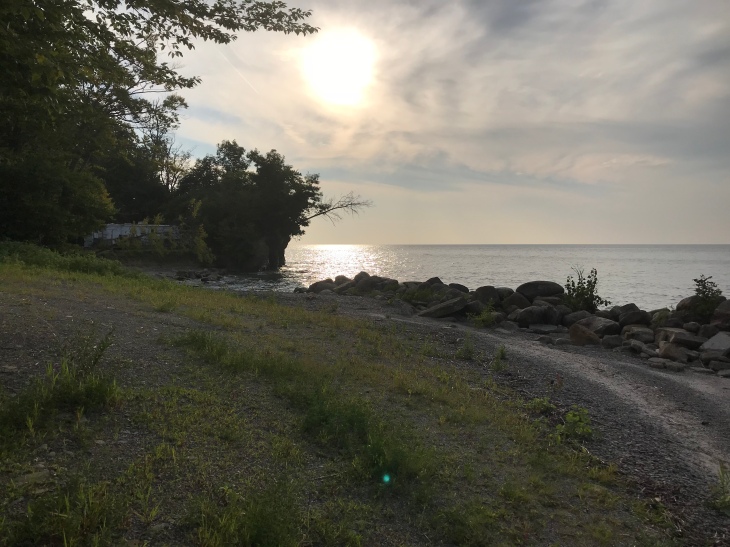 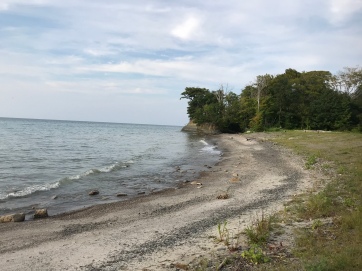 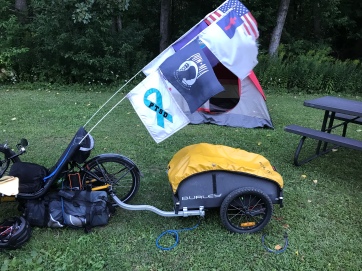 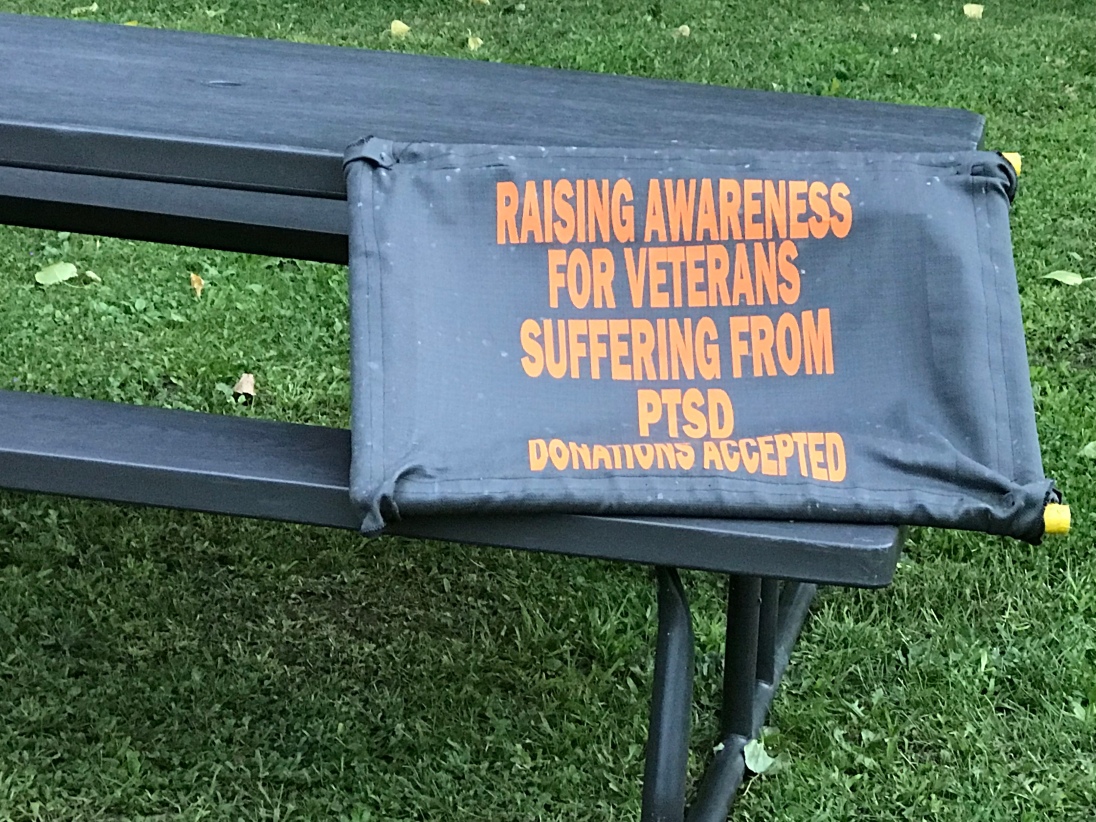 I had a good ride today. I started at eight and had a nice climb for the first half mile. A little down the road, I got on a very nice bike trail which got me through the city. I then got on Highway 5 and stayed on that the rest of the day. I stopped for lunch at 1 o’clock and stayed until almost 2. I had a nice meal and I shared my story with another veteran. I was back on the trike with 22 miles to go. I arrived at the Sheridan Bay Campground around five and met the owner, Rick. Camping is only $10 here so I paid, then Rick gave me my $10 back as a donation. I set up camp, went to the beach, then took my shower. I cooked  dinner on the Kelly Kettle tonight. I am now in New York state which is my 17th state. Keep on pedaling. 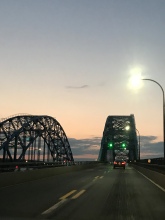 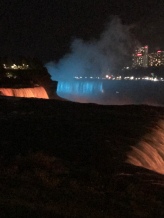 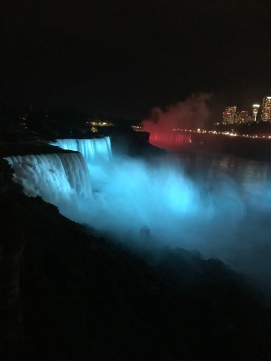 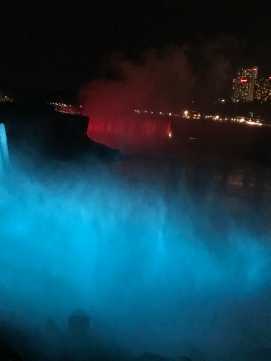 I had a good ride today. I started at 8 on Highway 5. I ran into a lot of road construction. The road was all torn up for several miles. I stopped for lunch in Hamburg New York at a Tim Hortons. It wasn’t that great. I got back on the trike and went to some back roads. I then got on some bike trails. I arrived  at my host house around 4 PM. Debbie and Ken are amazing hosts . Their three dogs greeted me and became my friends. The cats were nice too. I got settled in and took my shower. I was then treated to an amazing steak and seafood dinner at a local restaurant ending with a delicious dessert. After dinner, we drove over to see the Niagara Falls. This was an awesome trip and the Falls were breathtaking. We then went back home and I watched  some TV. I got a great nights rest and even had my laundry done. 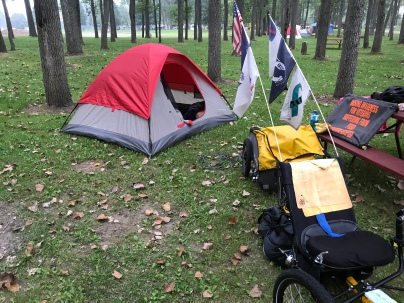 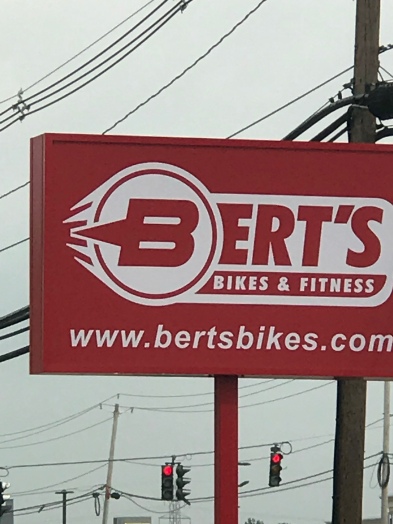 I had a great day. I woke up at eight and was treated to bacon and eggs with fruit and juice. I then packed up and was given some extra supplies for my trip. I then rode to Bert’s Cycle shop and had my trike tuned up. No major issues noted. I then got on the road at noon and stayed on back roads and bike trails all day. I arrived at the Niagara County Camping Resort at three and was given half off discount since I was on a bike. Campsite set up, relaxing, getting ready to eat. Great, easy day.