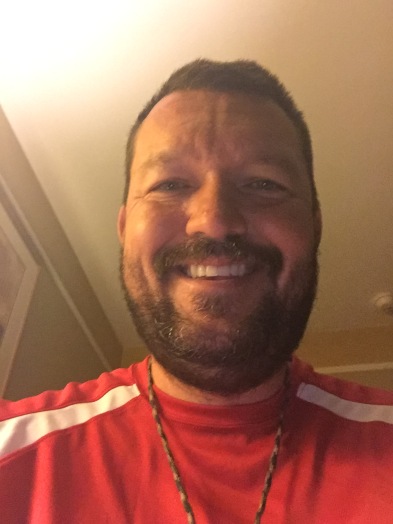 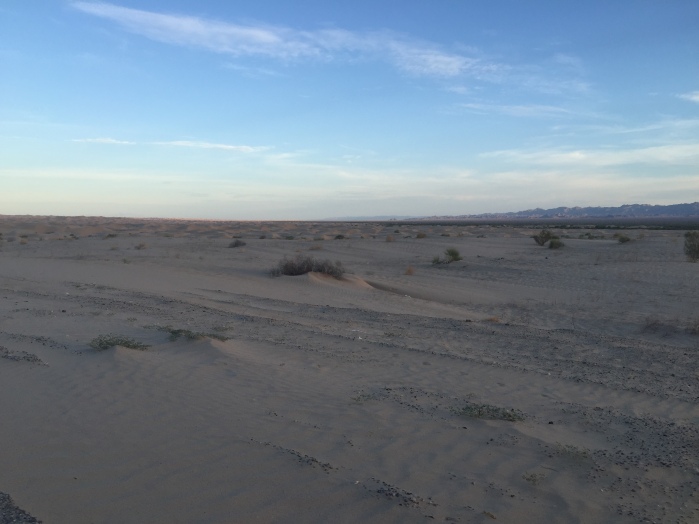 I had a long ride today. I started at 8 and the first 20 miles went through some flat farm land with a very good road. After stopping for lunch in Palo Verde, I came to a section of road that had what was called “dips”. This was nothing more than rolling hills with several ups and downs. This went on for about 30 miles. Fast downhills but very slow uphills. I got another flat tire but this time it was on the front tire. I stopped at a Border Patrol checkpoint to refill my water bottles and take a short break. After this break, I was pulled over by the Imperial County Sheriff. He lectured me about the dangers of riding my trike around the country. He then drove behind me to block traffic and kept me safe until I got past the dips. The last section of this day was fast and smooth. I ended up camping at the Glamis Flats sand dunes. I slept on the soft sand and had a very good sleep. High temperatures for today was 104 but I stayed hydrated. 1536 miles down. 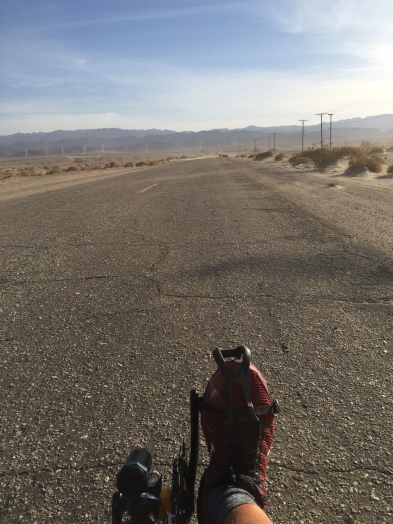 I had another hot day today. High was 108. I started the day in the sand dunes of Glamis. There were some climbs at the start. I started early to avoid some of the heat. From Glamis to Brawley was a good ride. I restocked supplies and ate breakfast in Brawley. After leaving Brawley, I went through a few more towns. Once I got to Seeley, the road turned into the worst road in America. For several miles, I had to go slow to dodge the larger potholes and ruts. After several hours, I came to a bridge that was totally closed and barricaded. There was no way that I was going to backtrack so, I had to lift my bike and unload my trailer to go over the barricades. Once over both sides, I reloaded my gear and started going the last five miles. All of the sudden, I was hit with a 40 mph wind and sand storm. After much struggle and fight, I eventually reached the Red Feather Off – Road Market. I put my tent up right next to the building to keep it out of the wind. I then ate dinner at the Lazy Lizard Saloon. Went to bed at 8:30. 1601 miles down

I started especially early today at 6 because I knew that I had a lot of climbing to do today. I was faced with a 17 mph headwind as well which made the ride that much more difficult. I climbed past the 2000 foot elevation sign and knew that I still had another 1500 feet or so to climb. My right knee began hurting very badly so I was forced to take several breaks. On one of my breaks, a retired firefighter named Blane stopped to check on me. He gave me a ride all the way to Alpine. He dropped me off at the American Legion Post 258. I met Wendy, Karen, and Sue the first day. I was treated to a free dinner of cheeseburgers and fries. I was allowed to camp out back and they provided me with a large amount of water and ice. Very nice people. I spent several hours icing my knees and hope to feel better tomorrow. 1658 miles down

I stayed at Alpine all day to rest. Was given two large plates of pasta for lunch and I continued to ice my knee and rehydrate. I met Cora and she took good care of me all day. I am feeling better and will be in San Diego tomorrow. 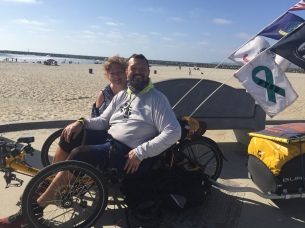 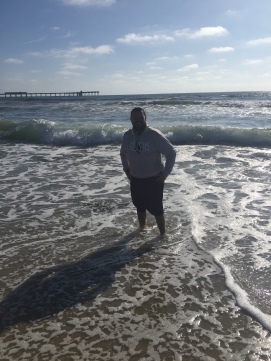 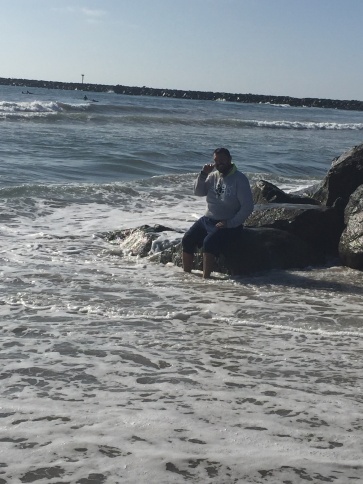 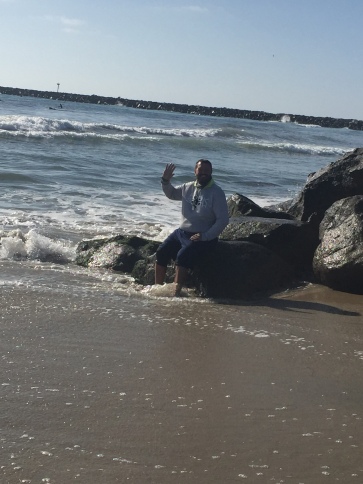 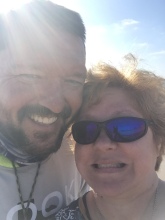 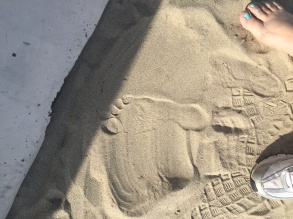 I had a good ride from Alpine to San Diego. Many fast downhills but I also had a few long climbs. I ended up having to take three different detours. This caused me to ride slower than normal. Even the bike path was closed due to reworking a natural gas line. This detour added several miles to my route. After finally getting back on the bike path, the last several miles went well. As I neared the Pacific Ocean and my first Corner, I saw my wife standing there cheering for me. She welcomed me to the coast and celebrated with me. We both waded out into the surf but the water was very cold. It felt amazing to reach my first corner. After a short time, we began heading back to the motel. Cindy walked for a few miles and the decided to rent a bike. Wow, she should have done this to begin with. What a day! 1703 miles down 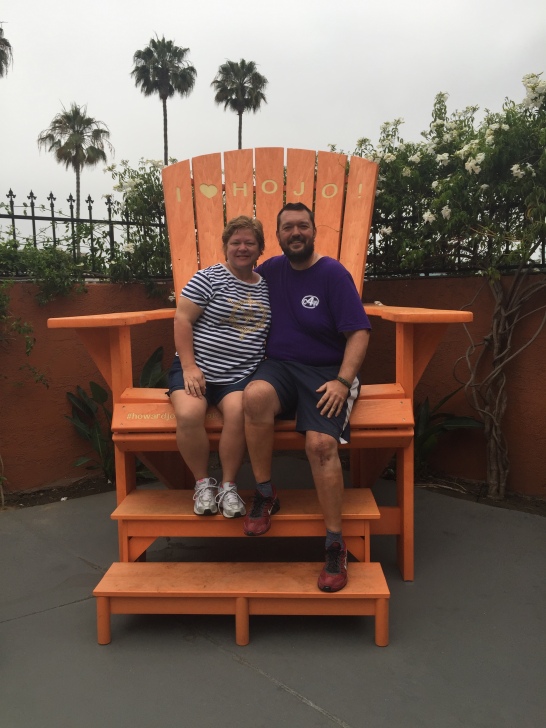 Cindy and I spent the day resting and relaxing. I did laundry and we walked to the store to buy a new shirt and riding gloves. We then walked to a bike shop a bought a bell and tube patches. We ate lunch at the Broken Yolk. We then stopped to restock my fluids and then headed back to the motel. Once at the motel, I began to get my trike ready and trimmed some gear out of my trailer. This helped me reduce some weight to make it easier to pull. We then went to dinner at a Chinese restaurant and spent the last few hours together. Today was also a tough emotional day for us because it was our oldest son, Willie, death anniversary. It’s been five years but it is still heavy on our hearts. We cried some together and held each other. We also began planning our next visit. This was a great day. 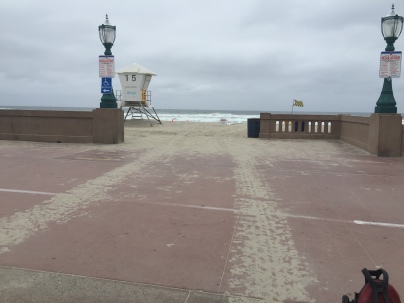 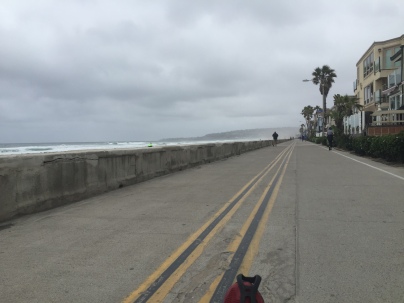 I had a late start today because it was tough leaving my wife in San Diego. I had a few detours early but once I got to the coast, I had a beautiful ride. I had a few long climbs mixed with some fast downhills. I rode past the Torrey Pines Golf Course. My friend, Sean Bannon, made a trip with his family to ride with me today. He found me just outside Encinitas and rode with me over 30 miles. We got permission to ride through Camp Pendleton Marine Corps Base. We then got on a very long bike path and rode on that almost all the way to San Clemente. It began raining on us so the Bannon’s decided to put me up in a hotel. Then they took me out for some Mexican food. They also bought me some Gatorade Endurance powder mix and a nice shirt and then gave me an awesome donation. We had a lot of great conversation and friendship. Felt great to be able to ride with him, spend time with the family, and be blessed by their kindness. Great family. 1760 miles down 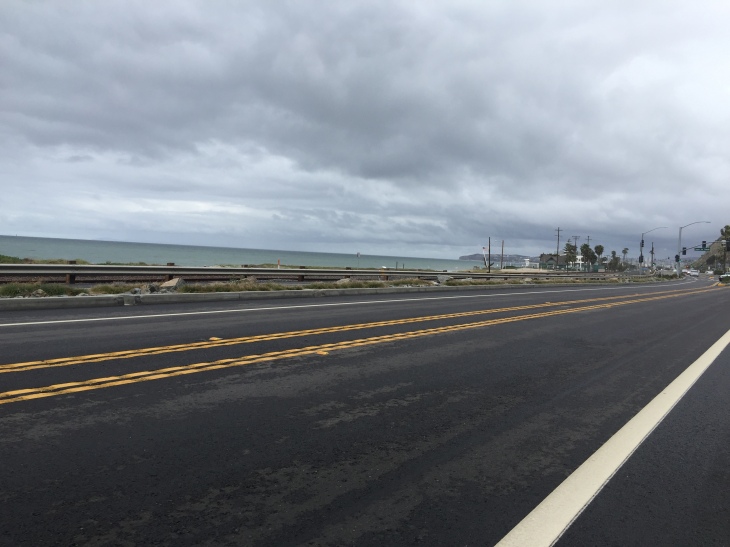 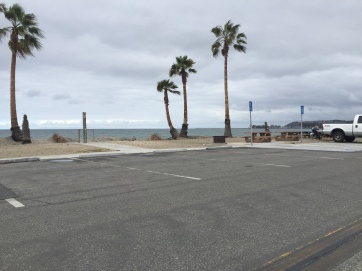 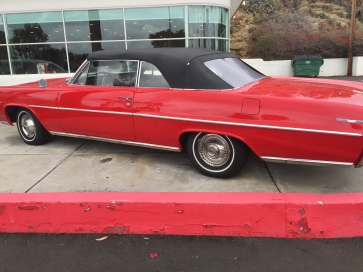 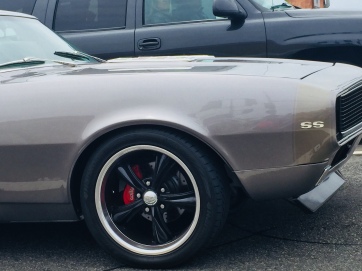 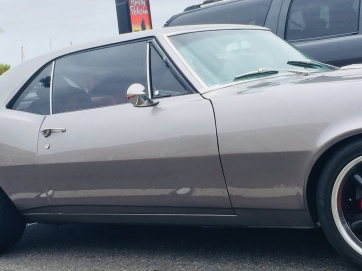 I had a fun ride today with a lot of great views. There were some hills but plenty of downhills and I had a good tailwind. I stopped for lunch at this diner called Ruby’s. I then arrived at the American Legion Post 833 at 4:00. I met with Kent Hall, Wesley, Phillip, Darrell, several other men, and the woman from the auxiliary. During the day, I became mixed in with a group that was doing a 100 mile ride for children’s cancer. It was fun riding with so many other cyclists. The Post 833 fed me, allowed me to stay inside the Post, and treated me like family. Great place and great people. 1824 miles down 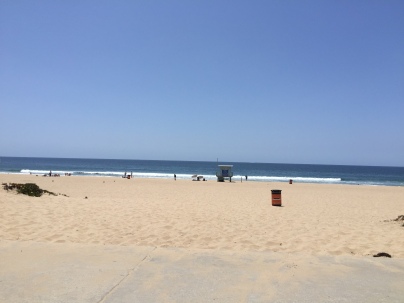 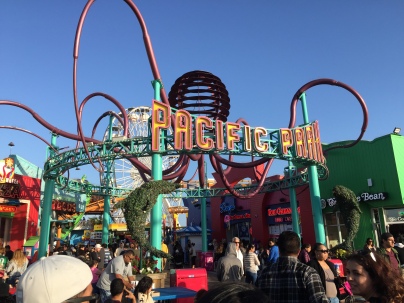 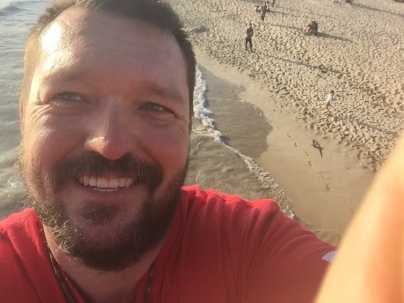 I left America Legion Post 833 at 11:00 and made it to Redondo Beach by 12:30. I then had a very easy ride right along side the Pacific Ocean. I rode on many bike paths with very little traffic. Venice Beach was a little loud and crazy. I made it to the Hostelling International Santa Monica at 3:30. The room is very nice. I ate dinner on the Santa Monica Pier at this place called Pier Burgers. There was a lot of entertainment on the pier and a lot of people. What a great day. 1851 miles down